A Primer on Driving Retention with Triggers 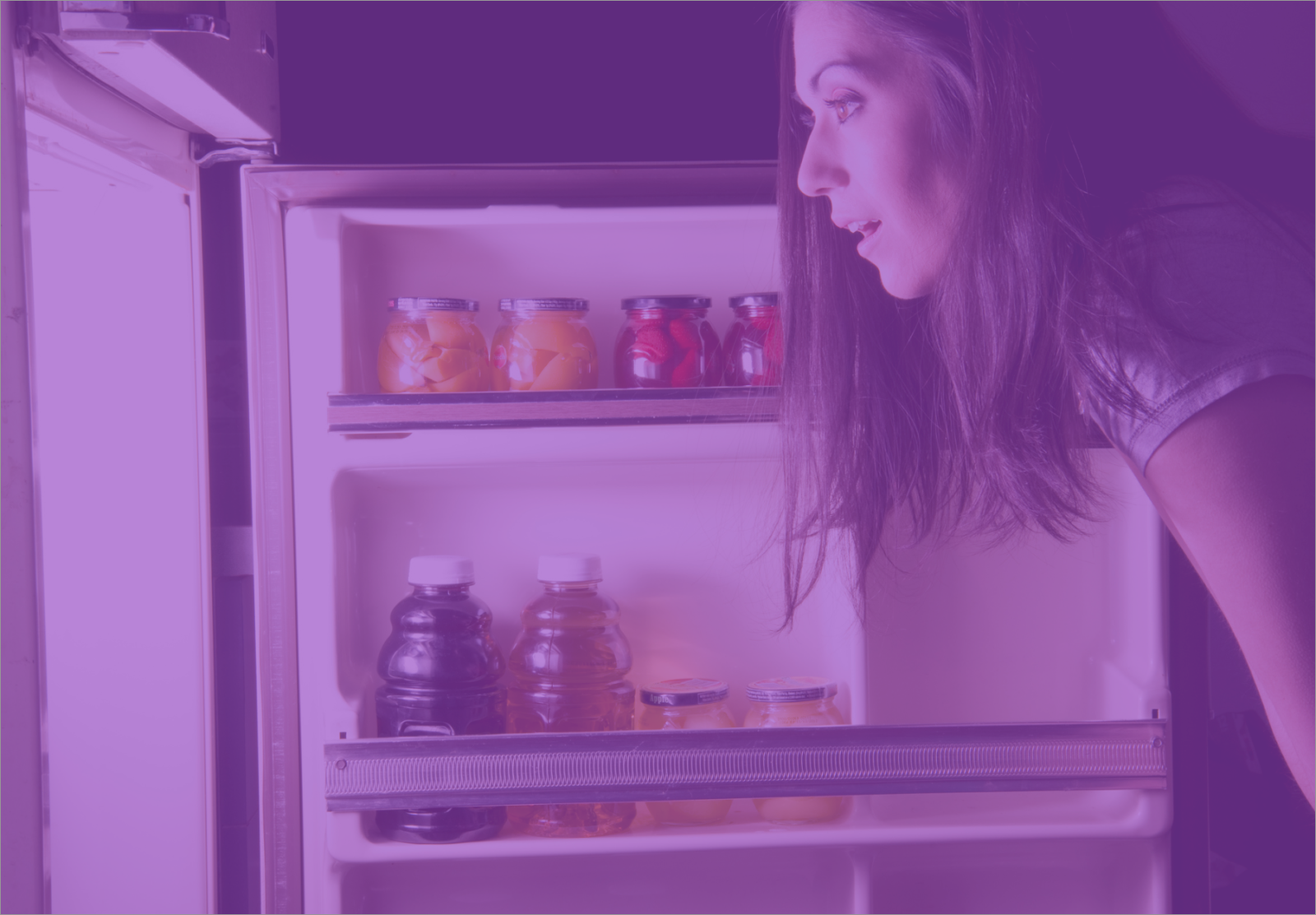 I’m a compulsive fridge opener. There. I said it.

Whenever I enter a kitchen, you can almost guarantee I’m going to open the fridge door—even if it’s not mine.

It’s not that I like wasting power or feel the need to pry. Oftentimes I’ve already pulled the door open before I realize what I’m doing. I’ve just been so heavily conditioned to certain triggers that it’s become a compulsion; that kind of pull is something that most app still struggle to instill in their users. 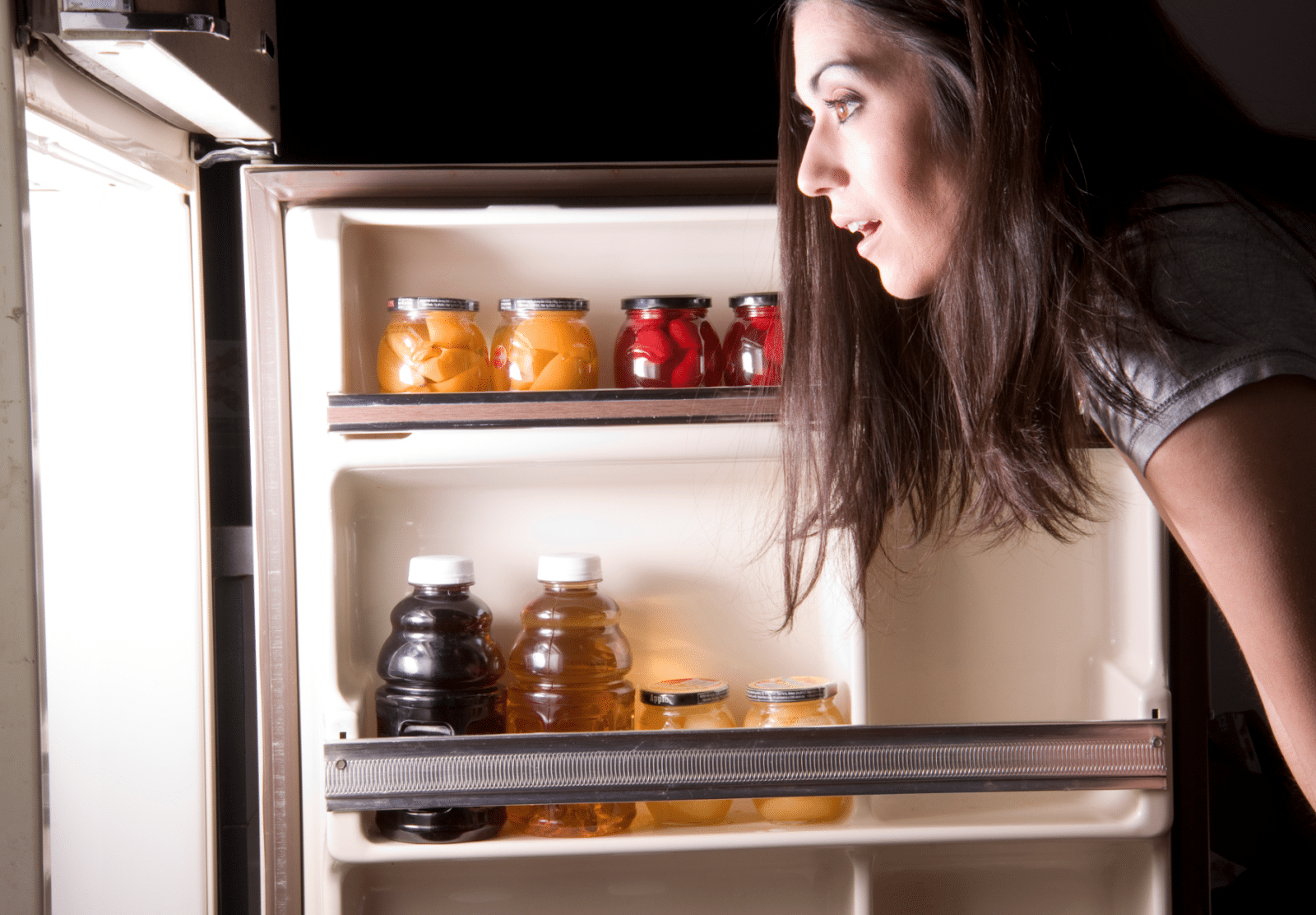 Unless you’re Facebook, Instagram, Pinterest, Slack, or a select few others, you likely aren’t seeing the retention rates you’re hoping for. Products that are quite literally addictive. But what have they done differently from the average app that shoots retention and growth through the roof?

Fridges (and apps like Facebook) re-engage repeatedly because they’re very effective at using triggers, one of the key components of onboarding.

So what are triggers?

Triggers are cues or reminders that prompt users to take a specified action.

According to BJ Fogg, a behavioral psychologist at Stanford, if one or more of these three elements are missing, a behavioral will not occur. That’s why we need to ensure that we’re optimizing our products to ensure they help users channel sufficient motivation, increase their ability to complete an action, and give internal and external triggers to re-engage* users.

*When I say re-engaging, I don’t mean just opening the app (which I’ve seen many teams count towards retention). I mean re-engaging users to complete core actions such as browsing, posting, converting, etc.

It’s important to note that triggers alone don’t do the work. Triggers only succeed if users have sufficient levels of motivation and a high ability to complete the desired action. 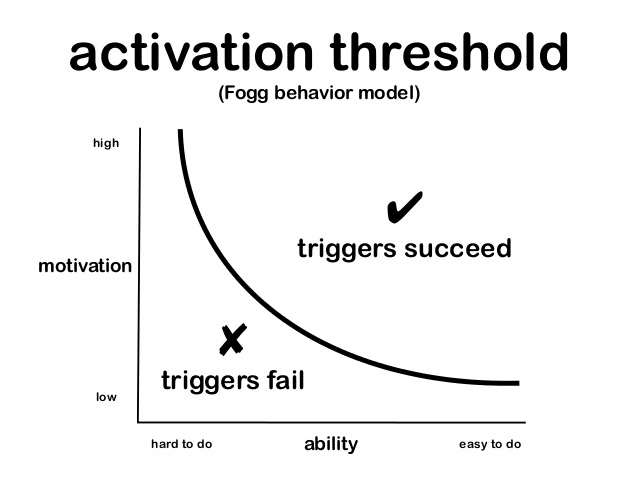 To help increase the success rate of triggers, you can increase user motivation by personalizing the onboarding experience, driving users toward the Aha! Moment, or writing amazing copy that clearly conveys value. In addition, they also need to give the users high levels of ability to complete core actions.

The Two Types of Triggers

There are two types of triggers: external and internal.

External triggers are external cues or reminders for a user to complete a desired action. These can often take the forms we recognize as advertisement or marketing techniques such as:

Each of these triggers targets a sense (visual, auditory, olfactory) and uses them to remind users that they should complete a desired action. Other than the obvious examples such as email or billboards, visual cues such as seeing a fridge or app icon, or smells such as the amazing sensations that are Cinnabon and Coldstone can also serve as triggers.

Internal triggers on the other hand “manifest automatically in the mind.” These are reminders or cues that are user generated, without any prompting. What’s key to note is that internal triggers are oftentimes tied to emotions or habits, and once set up, are far more compelling and correlated to user retention that external triggers. These are the incredibly powerful compulsions that are the key drivers for growth behind billion dollar companies.

Internal triggers are often so closely tied to habits that they often cause a bit of pain if associated action isn’t completed. Next time you’re bored in line or waiting for a friend, try not checking your phone and you’ll see what I mean.

One of the most common misconceptions that I hear among mobile teams is that push notifications are the key to re-engagement and retention. While there is some merit to this statement, I find it to be only partially true.

The reason is pretty simple. As we showed above with the BJ Fogg behavioral model, triggers are only effective when users have sufficient levels of both ability and motivation. Therefore, push notifications (external triggers) need to be backed by in-app value and and a high ability to complete core actions.

Otherwise, they run the risk of annoying users. 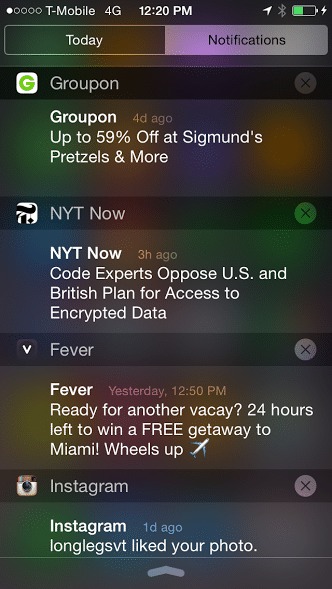 That’s not to say they aren’t effective when combined with a strong product. The key is to use external triggers to regularly deliver value to your users, and set up potent internal triggers. Both types are vital to retaining users over time, and neither can exist without the other. So let’s talk about how to use them in conjunction to create powerful drivers for retention.

Use External Triggers to Educate and Acquire

The goals of these external triggers are to educate users about your product (help them see the value), acquire them (get them to open your app), and start building internal triggers.

Let’s bring it back to my refrigerator habit.

When I came home after school today, I would regularly encounter a number of external triggers prompting me to open the fridge: I’d pass by it as I dropped off my school bags, I’d smell food in the kitchen reminding me of the scrumptious snacks awaiting me, and I’d get constant reminders from my parents saying, “check the fridge for something to eat,” or “I brought some leftovers from work.”

While not every external trigger prompted me to open the fridge door, I started to associate them with the pleasure of a midday snack. Each time I completed the core action (consuming food or drink), I build a stronger tie between each of the external triggers and the reward.

I soon learned that not only was I getting high levels of value from completing the core actions, my ability to do so was also high as opening the fridge door and preparing food (whether eating directly or microwaving it) was quite simple.

So external triggers were effective in starting to build that association, but having a high ability and high value in conjunction were crucial to building that habit.

Note though, that these alone wouldn’t have created the almost unthinkable habit of opening strangers’ fridge doors though, so let’s talk about how to create that kind of habit.

One of the key reasons that this conditioning is so effective is because of the hit of dopamine we receive whenever we experience a trigger. Think back to Pavlov’s dogs for a second. Due to the strong habit built through the dinner bell, the dogs would start salivating well before they even received the food (value). In another study, Robert Sapolsky measured how dopamine levels are actually triggered in the brain. 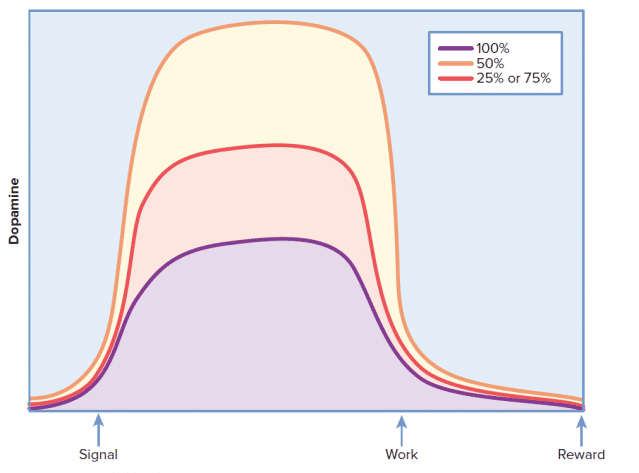 Sapolsky, who conducts research on primates and rewards, showed that the dopamine release isn’t about pleasure, it’s about the anticipation of pleasure. Perhaps even more relevant to our cause is that “maybe is addictive like nothing else out there.”

When studying primates, Sapolsky noted that dopamine levels more than doubled when variability was introduced into the equation. That is, if the researchers didn’t always give the primates a reward, dopamine levels surged when they experienced the trigger.

In my case, variability existed because I was constantly receiving different types of rewards or none at all. Sometimes there’d be BBQ ribs, ice cream, or Coke. Other times I’d get carrot sticks, old bread, or gross stir fried veggies. And then of course, oftentimes I’d open the fridge and bitch that there’s nothing to eat. Typical.

Since dopamine levels surge with variability, that meant I was even more likely to open the fridge door, since the dopamine reward I received when opening the door was so high.

Companies do this all the time.

It’s the reason endless scrolling is so popular. As Nir mentions, when you’re scrolling your Facebook feed, some of the content will be amazing. Some of it will be atrocious. And most of it will be mediocre. Yet this variability is one of the key factors in increasing the amount of times we do it, and why we keep doing it late into the night, even when we’re supposed to be sleeping.

As my intimate relationship with my fridge blossomed and matured, I started to notice something quite peculiar: I’d start to open the door for seemingly no reason at all. I’d be talking with my parents in the living room, then suddenly find myself peering up and down the fridge shelves.

What had happened is that I had started associating the restlessness I felt after school with the reward I felt whenever I opened the door. Day in and day out, I had created this regular recurring habit that became automatic.

Once a neural pathway for a habit has been created, it becomes incredibly easy to activate (which is the reason why former drug addicts or smokers find it so easy to fall into old habits). In addition, I had tied this habit to a specific emotion: restlessness.

That’s why you’ll oftentimes spot me checking the fridges here at Apptimize for seemingly no reason. Whenever I feel restless, my neural pathways activated and I head for the fridge. These internal triggers have been harnessed by companies such as Facebook, Snapchat, Pinterest, and Slack to create retention habits that are 9x harder to break.

Instead of relying on external triggers to re-engage users, focus on building habits by using external triggers in conjunction to strong product value. Sticky products happen when teams start tying user value in with habits and emotions.

Also, if you haven’t yet checked out Nir’s book, it’s one I couldn’t more highly recommend. In it, Nir really digs into these concepts and explains not only the psychology behind it, but also how brands are applying these to build billion dollar companies today.

Product leaders are increasingly realizing that simply acquiring users isn’t enough for their mobile apps. In order to form lasting connections, you need to focus on user retention: demonstrating the value of your product as a means to earn loyal users...

“How do I track and measure user retention?” If you’re managing a fairly successful mobile app, you’ll inevitably run into user retention issues. User acquisition tactics can get you quick traction, but building sustainable, long-term growth all comes down to...

A Primer on Driving Retention with Triggers