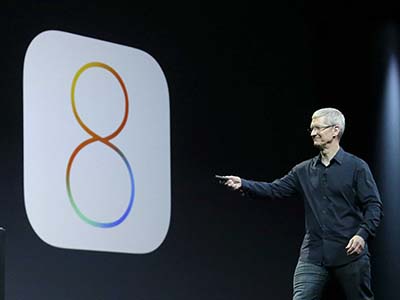 Is iOS 8 going to launch next week? We don’t know, but we’re ready if it does!

Here at Apptimize labs, we’ve thoroughly tweaked and tested things to make sure that A/B testing on iOS 8 is as seamless as it is on iOS 7. Actually, it might even be more fun. While not quite the dramatic change that iOS 6 to 7 was, there are a few features on iOS 8 that could have a big impact on the way users interact with your app. Because these features are new, it’ll be interesting for all mobile product managers and developers to test how they impact each individual app.

Notifications are going to be interactive! This sounds familiar… Oh yea, that’s because some Androids have been doing it for years. And Google also announced something similar for Android L.

I’m excited to see how this will affect my consumer experience. Will my apps start interrupting each other? Will Facebook allow me to like posts that I’m tagged in without my having to go into the app? Will I go to the app more because the alert will now appear when I’m writing emails? Will I start deleting all these apps because their notifications become too annoying?

Ok, this isn’t necessarily related to iOS 8, but it’s pretty exciting. Both Apple and Google seem to be leaning hard into wearables. We got some Google smart watches when we went to I/O a few months ago. While some in the office really love them, I’m still pretty eh on the wearables. I write a lot, so the giant, made-by-men-for-men watch really gets in the way of my typing. I’m waiting for the women’s version to come out.

My personal opinion aside, it’s going to be a new challenge for wearable apps to figure out what content goes on the small device versus the phone. This is where A/B testing will make a really huge impact. We need to stop guessing what works and just test it out.

Apptimize Webinars to Help You Plan Your Next A/B Test

Whether you’re just getting started with mobile A/B testing or you’ve been testing since before it was cool, knowing what to test next is sometimes a challenge. That’s why we’ve set up two webinars to give you some ideas based...

Infographic: 7 Things to A/B Test in a Travel App

Our third infographic in the “7 Things to A/B Test” series! Click on the image below to see the full infographic.