As the user progresses through the first set of introductory tunes and wants to move onto the first real song, a pop-up appears asking the user to unlock the songs for a fee. 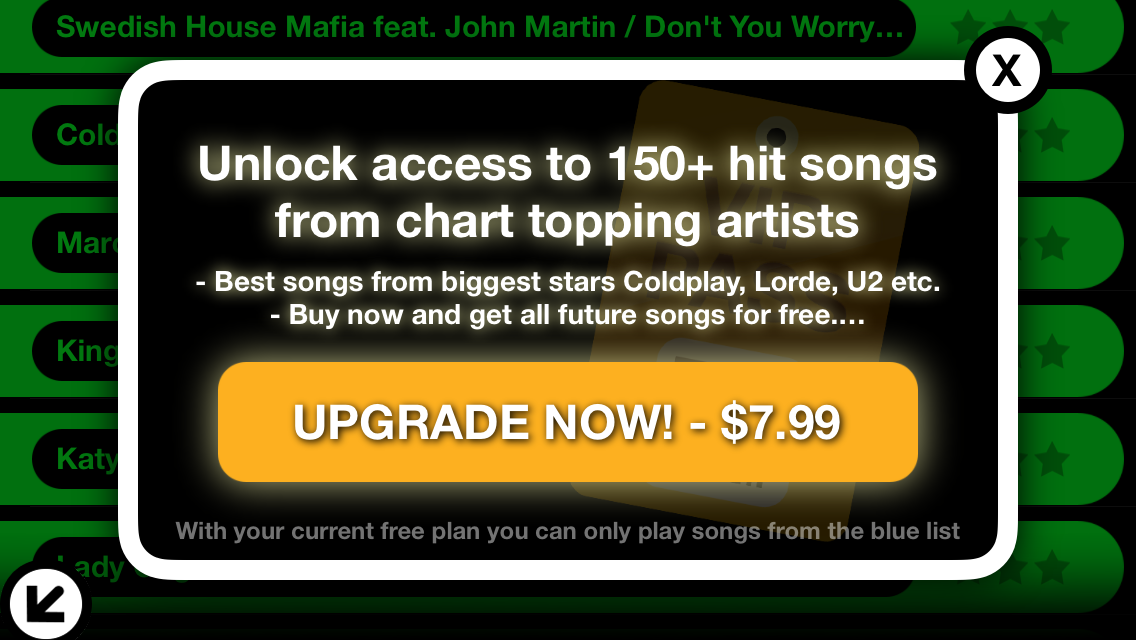 While ChordShaker was seeing decent conversions with this message, they wondered if they could get better more upgrades by testing the copy on the pop-up.

ChordShaker’s general hypothesis was that the conversion rate on this page could be increased by either changing the copy of the headline of the message, the bullet points, the button, or a combination of all three. The first test they ran implemented their first hunch:

The new variant (Yes, Let’s Rock) performed terribly. ChordShaker learned from this experience immediately. They learned that they could not tell what about this change turned users off because too many things were changed at once.

Learning and iterating, they decided to experiment with changes more incrementally by testing:

Unlock for Life increased clicks on that button by 28.8% as compared to Upgrade Now.

Chorshaker had set up this experiment using the Visual Apptimizer, meaning that they created the copy change and set the button click as the their metric without programming and released the A/B test to their users in between app release cycles. Apptimize then automatically detected that this click metric was associated with an event in the app that triggers when the purchase is completed, so it created the next metric in the funnel automatically.

Because the actual rate of purchase (not just clicks to purchase) was tracked, we also know that the new copy increased ChordShaker’s actual revenue from upgrades by 20.1%.

The App SafeTrek is an app available on both iOS and Android that empowers users with proactive mobile protection in times of emergency. Users launch the app when they feel that they are in (or about to be in) a...