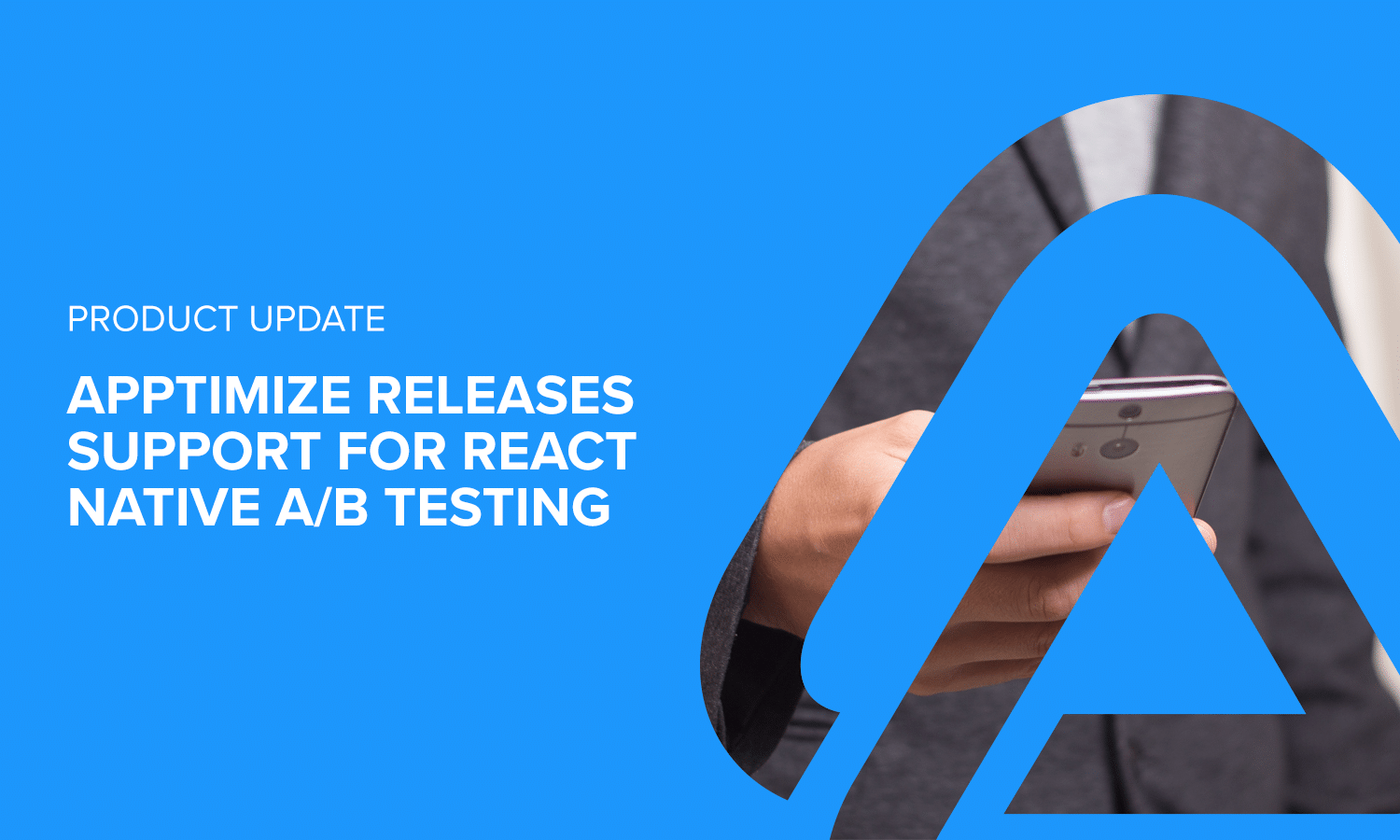 We’re excited to announce today the release of our React Native SDK! For mobile development teams building apps on React Native, A/B testing can now be done quickly and with fewer resources.

Developed by Facebook, the React Native framework is built around a single codebase, which eliminates the need for developers to write separate codes for iOS and Android. Mobile app development teams using React Native find they can save time with the shared codebase and by leveraging internal resources who use Javascript. Apptimize’s native support for React Native allows those teams to see time and cost-saving benefits extend from development to A/B testing.

With Apptimize’s React Native SDK, mobile teams can quickly run A/B tests on new app features since they no longer need to write and maintain bridge code. Instead of allocating resources on workarounds, developers can easily build native apps and carry out A/B testing directly in the mobile app.

“Most mobile apps that use React Native have resorted to A/B testing on mobile web because it has been so hard to test directly in the mobile app itself. This work-around leads to inaccurate results because the users in a downloaded app can behave pretty differently than users on a mobile website,” explains Apptimize’s VP of Product Scott Ings.

“Apptimize’s React Native SDK makes it so that you don’t have to sacrifice accurate results for speed and ease of use anymore.”

Brands that adopt React Native report an array of benefits, from the ability to provide a better user experience to seeing developer velocity improve.

Here are some of the results that top apps saw from React Native:

The social media network, whose team of developers is responsible for releasing React Native, has built its Facebook Ads Manager and Facebook Ads apps using the React Native framework. Both apps have superior performance, with Events Dashboard in the Ads Manager loading twice as fast.

Thanks to the simple UI of the app, it was a good fit for React Native. The engineering team saw an improvement in developer velocity since a lot of codebase between iOS and Android was shared. Product teams were also able to ship new features much faster using React Native, while still providing a UX that felt native.

Walmart was one of the first retail apps to use React Native. Since 95% of the codebase is shared between iOS and Android, the development team saw greater productivity while offering a smoother experience for their customers. One of the main advantages they saw was the ability to bypass the app store approval process and do over-the-air fixes.

With React Native, the development team at Bloomberg liked how the automatic code refreshes allowed them to release new product features more quickly. This feature also accelerated their A/B testing efforts by letting them rapidly experiment, iterate and push out upgrades.

The Tesla app built on React Native is designed for owners of the branded electric cars or Powerwall users. Whether users are on Android or iOS, they benefit from feature parity with access to the same controls regardless of platform.

Product and engineering teams can now choose from the top four mobile backend technologies with the addition of our Java SDK We are excited to announce that we have made a substantial addition to Apptimize Cross-Platform with the release of...